Practitioners commit to using evidence in a variety of ways and help produce tools and guidance for doing so. This includes:

Funders ask applicants to describe the relevant evidence in their grant applications in order to assess how evidence-based the approach is. Funders have adopted a range of practices to ensure that the evidence is used. This allows funders to understand the work in the context of the wider evidence-base.

Journals ask authors publishing papers testing conservation interventions to check and discuss the existing literature collated by Conservation Evidence in their paper. This helps place each study in the wider, unbiased context of work that has been done before, and may encourage conservationists to review the evidence before taking action.

We also work with other organisations and individuals in a variety of ways. 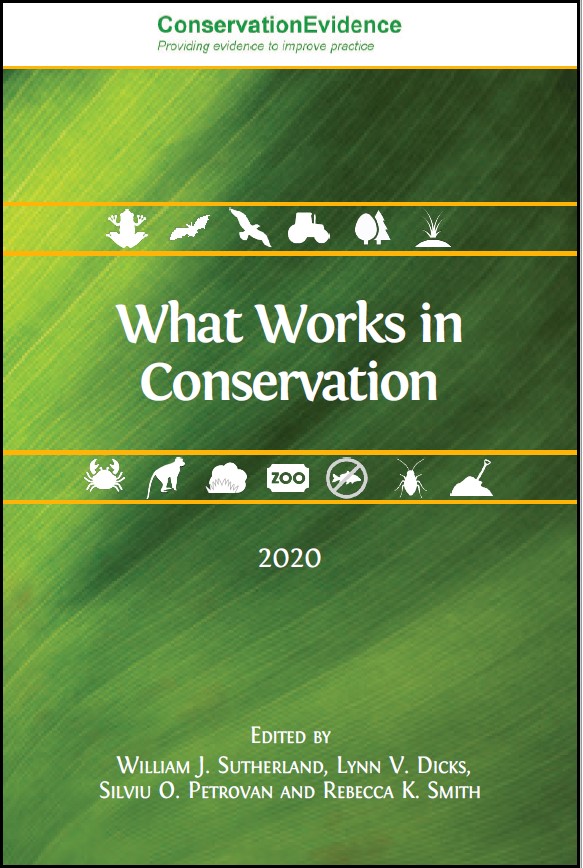 What Works in Conservation

What Works in Conservation provides expert assessments of the effectiveness of actions, based on summarised evidence, in synopses. Subjects covered so far include amphibians, birds, terrestrial mammals, forests, peatland and control of freshwater invasive species. More are in progress.

More about What Works in Conservation

An online, free to publish in, open-access journal publishing results from research and projects that test the effectiveness of conservation actions.

Go to the CE Journal
Tweets by ConservEvidence

Please add your details if you are interested in receiving updates from the Conservation Evidence team about new papers, synopses and opportunities.

Meet some of the evidence champions

For a full list of, and information about, our champions:

About our champions, why and how to become one:

We use Cookies to personalise content and ads, provide social media features and to analyse our traffic. By using this site, you will be providing your consent to our use of Cookies.